We have a brave  boy !  John was ready to leave for the hospital at 8am, kind of excited about it, even  though we didn't have to leave until 10 am.  Good thing he's not that much of an eater because he did not ask for food or drink at home or at the hospital until 1pm and that's when he got the versed medicine to help him with separation anxiety and he was off to the procedure.

It brought on many memories sitting in that waiting room that I did not want to relive and it didn't make it any easier knowing it was only for dental work this time.

John was in good spirits and by the time they had to take him he was so drugged up that he did not cry or wasn't even phased that the anesthesiologist took him away from us, he was practically sleeping.  When we walked into pre op there was a game and two matchbox cars waiting for him, courtesy of Child life department, so that made it less scary . We played one round of pop up game, then some Legos and then with Play dough. We were scheduled for 12:15 but of course they were running behind (hospital time, we like to joke) and they took him around 1:15.  Before that we discussed the procedures with our dentist, Dr. Lubas and the anesthesiologist, who is very familiar with heart kids, as she works with for pediatric cardiac kids only. 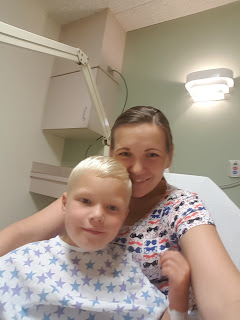 We were escorted to the waiting room and had some lunch in the waiting room. Then I went to pump and came back and still no word from the OR. Then around 3:30 they came and called us that they were finished. We talked with Dr. Lubas. John had 2 palpitations (sp?) and all the fillings and 3 crowns put in. ( I need to take a pic of those but they are silver).  All went well as scheduled. Thank God!

Next only one parent was allowed in the phase 1 recovery - immediately out of the OR. As soon as I entered the double doors I heard Jasiu, not crying rather coughing. He does this if his throat hurts he coughs. He was quite polite about it and covered his mouth every time he coughed. I asked if he can get water and they allowed it, it only slightly helped. Then the anesthesiologist asked if he likes popsicles?  That calmed him down immediately and she even brought two ! So that helped his spirits and throat, I call that a win, even though it was such a bright orange (read artificial color and most likely flavor).   After about 15 minutes we were escorted to another phase 2 recovery room and dad joined us. 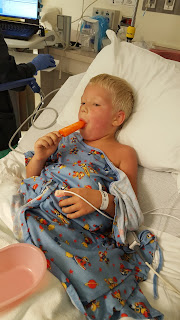 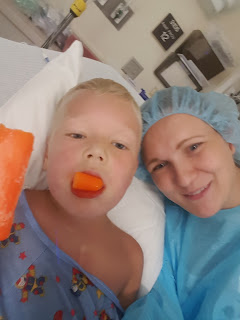 The phase 2 recovery he got some juice, vitals were taken a few times and then finally he was ready for discharge, it lasted about 45 minutes. Finally the IV came out and we were discharged around 5pm.  All in all not terrible timing.

In the last 3 hours Jasiu had some chicken soup, yogurt and bread dipped in milk so his appetite is slowly returning.  Only restriction we have is no swimming and bike riding due to anesthesia needing to wear off completely over the next 24  hours.

Then we are on to regularly scheduled activities.   Kindergarten in 2 weeks !!!

Now we have movie night and then off to bed. Thank you for all the prayers.