On Wednesday, day 9 post Fontan the team decided it was time and Jasiu was ready for having his chest tubes pulled out. Before that happened though, we already had a pretty good day. Jasiu woke up in a better mood and wanted to go for a walk and played with bubbles and even walked a little bit (as tricky as that sounds) with the chest tubes in... all before morning rounds (here on 2nd floor morning rounds are around 10am). During rounds we learned that the output from the tubes was low enough to have them pulled out. We also learned that Jasiu has our team a little stumped as it relates to the fluid that was draining from his chest. The pleural effusins (in his lung cavity) tube was a completely different color and consistency as the mediastinal (in the general heart area). It looked almost exactly like chyle, but two tests confirmed that it was not technically chyle since the lipids/fat content though elevated, not at the full chyle level. Additionally the mediastinal tube produced a completely clear discharge, not one cloudy drop. The team decided that it is best to put our little man on a fat free diet for about 4 weeks to let him heal so that the chyle does not become a problem. This most likely a result of  injury of the thoracic duct during surgery and instead of absorbing the fat from foods, the body leaks it our around the lungs and chest cavity, so it's a pretty serious complication, but pretty curable one.  From About Kids Health .org info on Chylothorax


Link to additional information about Chylothorax

What is a chylothorax?


A chylothorax (say: KY-low-THOR-ax) is a build-up of fluid in the space around the lungs. The fluid, called chyle (say: kile), is a normal fluid that is made when the body digests fat. When it builds up, it puts pressure on the lungs and makes breathing more difficult.

The doctors often drain the extra fluid from around the lungs with a chest tube. Sometimes, that is all that is needed. But if the body keeps making too much chyle, your child may be put on a special diet. This diet will lower the amount of chyle your child’s body makes. This will help prevent a build-up from happening again.

Your child’s doctor or dietitian will help you with the details of your child’s diet. In general, your child should avoid eating fats. The less fat in your child's diet, the less chyle the body will produce.

The chest tubes were pulled at 2pm by the cardiac surgery nurse practitioner. We opted to stay in the room while she did it, it wasn't pretty but I never had issues with queasiness or blood so I was fine, Joe stepped aside for the pulling. It wasn't really that bad, they sealed up the holes and put dressing over it. Jasiu was still on the versed and was pretty loopy for a little bit, than the dietitian came in to explain this whole diet thing and at some point we wanted to keep Jasiu occupied so we gave him a lotion bottle but he started to get too messy so I took it away, bad mommy. I think the combination of me being mean and taking it away, the versed and all the bottled up emotions from the past days where he had really no freedom or comfort to throw a tantrum, Jasiu lost his marbles BIG TIME. I mean screaming, kicking, biting, hitting his head on the crib, thrashing.. I have never seen him that way, EVER. It didn't stop for 10 minutes after Joe and I tried to calm him down so we called the nurse because I had no idea what to do and he looked like he could have seriously hurt himself so Joe and then I became Jasiu's straight jacket. The PSHU doctors came in and though it could have been a reaction to the versed, the ordered a drug to reverse the versed and still nothing, another 10 minutes passed and he is still kicking and screaming, pulling iv's, etc. He kept his color and oxygen saturation's during this whole time but from the screaming his eyes started getting puffy and we almost gave him benedril but then someone, have no idea who, suggested we go for a walk and after a 30 minute episode, he calmed down. It was pretty scary but maybe he just needed to get all that out of his system. Then his dinner came and he actually wanted to eat.. only peas and katsup, didn't care for the corn, carrots or beans, only peas but after so many days of No No No, we took what we could get. His mood brightened up and he was playing and for the first time (besides on Sunday when he had a lot of friendly faces visit him, my sisters, and when Emily was here briefly) I saw my boy back. He was playing his violin and even wanted to dance, but the IV in his foot made that uncomfortable. He kept his sats up so we were able to take the nasal cannula off, even though he was not connected to the oxygen for almost two hours. 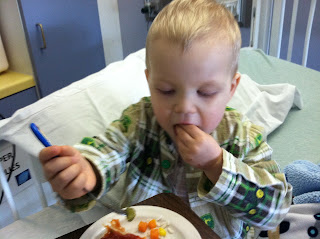 He then took a nice long nap, took his meds fairly well and we had a nice restful night, for the first time in 9 days the nurses let us sleep for 6 hours straight.

Thursday he already ate almost a whole yogurt and a quarter of a banana for breakfast, some chicken and vegetables and pickles for dinner. I think as he eats more he won't be as thirsty but he's a little more whinier about the drinking.

The plan is to make sure that we have no fluid build up and and sats are kept up so we are still on the diuretics and supplemnets but hopefully the bananas, milk and ketchup keep up jasiu's levles of potassium, calcium and sodium up so he doesn't come home on these supplements, believe me ketchup tastes better than 5 mls of salt water, potassium chloride and calcium chewable(that's what he's been taking twice a day for a few days now). We will have an echo and chest x-ray and we keep up the fluid restriction to 930 mls (31 ounces) per day.  If we do well for the next two days, we may be able to go home on Saturday. 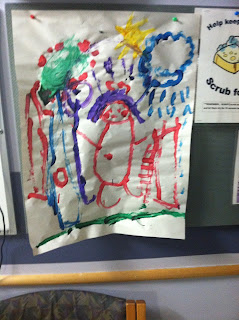 We keep praying and thank you for all the prayers for a full recovery so that we can have our spunky boy back full time.  The best medicine so far have been the visits from Emily. Dr. Vanbergen at rounds on Thursday said, make sure you get Emily back here often, so she has been visiting. She is actually having a blast in the hospital, chatting up all the doctors, telling them that our rocking chair is "junk" (it's all cracked up on the seat). She told one of the nurses when she turned around that she can see her butt, thought it was the funniest thing when we accidently ended up on the 4th floor and couldn't find john, even smacked Dr. Vanbergen (cardiologist) on the butt and thought it was the funniest thing. She has been a blast to be around here. She also did a lot of fun things with her aunties, grandma and I took her to Chuckee cheese yesterday for a little bit (it's a few blocks from our hospital).  She truly is a champ through all of this. Yesterday Emily and John also visited the play room here at the hospital and Emily painted Jasiu a picture for his room. 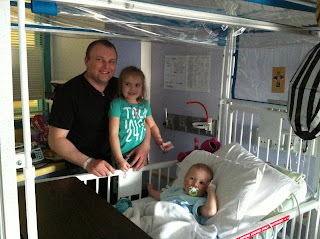 Additionally as we near the home stretch here, I think I need to send a special thank you to our whole support system, i.e. our families who helped so much during the last two weeks and all those praying for our sweet Jasiu. Emily was in great hands through all of this time away from her normal and she had a great time with my sisters and both grandmas. We are so blessed the they live so close and we can get someone to be with her on very short notice because in hospital life things change quickly and unexpectidly.  We truly love you all.
Posted by Kathy K at 5:57 AM