So Blessed yet still So Unfair

I have to start out like this... we are so blessed to be where we are and couldn't be more happy with Jasiu's progress. This weekend especially I felt just incredibly blessed how happy, spunky and ALIVE our little warrior really is. We had a weekend full of parties, two big 1st communion parties (one Saturday and one Sunday) and a 90th birthday celebration of my mom's uncle, we all call him Grandpa (he is the one who said the blessing  before our wedding 7 years ago).  Jasiu did wonderfully, took a nap before the Saturday party and was completely ready to go - smiley from ear to ear. When we got there and he saw the hall and the band playing, his eyes just lit up he was so excited and curious the amazement in his eyes was breathtaking. He is just so aware of the world around him. We managed to get through dinner fairly well and than the "dancing" started. He just tore up the dance floor - all by himself he went and danced and danced and danced, waiving his arms, and "dancing" in circles, sometimes bouncing his knees. Everyone was so amazed with his energy and how he wasn't afraid of the adults (probably giants in Jasiu's eyes) dancing all around him... ohh no he wouldn't dance on the sidelines, he needed to be on the middle of the dance floor.  See some videos below of just what I mean. Personally I think he gets his moves from his daddy :) When he wasn't dancing he was running after the other kids back and forth in the hallway. And most of the party he was in motion.

However, all that said, it is still so unfair, it's unfair that this child despite his biggest determination gets tired and winded so quickly. One song and I noticed he was out of breath, he kept wanting to run and was falling probably from tiring out. I would dance with him in my arms and he wanted to be put down. It breaks my hart that I had to pick him up and keep him from something that he wanted to do that most kids his own age can do for hours.. run around like crazy toddlers that is. .. without having any limitations.  One song and I noticed that he was so winded he was coughing uncontrollably.. we rested for a bit, against Jasiu's own will and again barely one song and same thing... I felt so bad that I didn't pick him up sooner to take a break that when he finally calmed down he began caughing again to the point he threw up (in the hallway, thank goodness and not on the dance floor).. but still it's so unfair that things he loves doing have to be halted and affect him negatively because of his heart and we can't do anything about it.  Despite all this after I cleaned him up, what did he want to do?... put on a happy goofy grin and keep going, but I called it quits and we headed home (mostly because we were both puke Stinky :(  ) I know life in general is not fair and I really shouldn't complain but for Jasiu it just isn't fair and I already think about the day I will have to explain it to him. Now seeing him like this makes me think that he will want to do all the things he may have restrictions on and then we'll have to cross that bridge when we get there. Just Unfair because from the outside he looks so "healthy" sometimes people don't even realize why I do what I do for Jasiu's own good.

Today again, we had the two parties and he was all smiles, giggles and dancing and though you can't tell from just looking at him, I know this kiddo is struggling. But God gave him such will power, energy and determination  that I hope he can soon learn his limits and Jasiu won't be mad at mommy for stopping his fun occasionally so that he can catch his breath.

Now for some videos of the fun we had this weekend. ( I have to end on a happy note.. after all we have so much to be thankful for and so many blessings.

We had a cardio appointment today, the first one in 4 months ! In pure Jasiu style, the night before he was running too fast and tripped in Emily's room before bedtime and met her Barbie doll house face first and landed a pretty decent scratch on his chin. Nice ! My heart baby is one of the most rugged kids I know, this kid has more bumps and "accidents" than his sister and we were supposed to keep this one on a closer watch... but it's not working, he's just too fast (we were both two feet away from him and still), I digress... 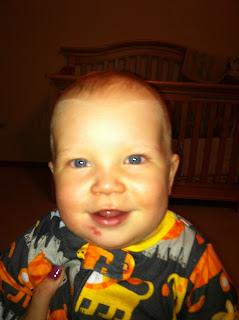 We had our normal 8 am appointment as I like them (first appointment of the day = no waiting). We barely walked into the reception/waiting area and Jasiu's bottom lip started quivering and tears were rolling :(  He calmed down a little while they got our room ready and then we were called back and it started from 8:10 to 9:15 Jasiu was crying hysterically. All through his weight/height check, pulse ox, respiratory and blood pressure. He cried so much that hour that now his voice sounds so hoarse as if he was screaming all night. We saw the nurse practicioner for a while and it was as if his light switch was just turned off, he liked her (finally omeone he liked there!) more specifically he liked her badge, pager and every other thingy that he was interested in, but he wasn't crying, he was showing off his walking skills and how friendly he is, he even danced wiht our Elmo. She got our history since our last appointment and informed us that we won't even talk the F word until 6-9 months from now and that was it. Next the therapists came but we were already on the list for echo so we couldn't get out of line to do therapy stuff so we only saw them for a minute and then the echo tech was ready for us.  Rick, as always was so calm, gentle and likeable that Jasiu liked him too, well... until he saw the echo wand... then he got a little angry, uncofortable and just uncooperative. So we tried our old fashioned way (mommy holding Jasiu in her arms the entire time). Well it worked, he was calmer on  my arms, took his bottle  and began drifting off. My master plan still worked. 1) schedule first appointment 2) tire him out during vitals and all other items 3) hope that he falls asleep during echo. The remaining 30 minutes of the echo were great and Rick took great and accurate pictures.


The next part I wasn't expecting, Dr. H came in to discuss the results of the echo. Instead of the "everything looks great see you in 4-6 months"  we got " we have to try adujusting his Enalapril because his heart muscle is thickening most likely because he still has high blood pressure and his heart is working too hard" Basically he explained it his heart muscle is thickening same as any other muscle would if you were lifting weights heaveier than you should and your arm muscles grow, however in the case of the heart we don't want that, we don't want his heart larger than it should be.  He didn't say this is extremely bad and it's a similar situation we were in when we were originally put on Enalapril his heart went back to normal after we checked him two and then four months later after the medicine began doing it's job controlling the blood pressure. But instead of outgrowing his dose and weaning off, we must increase his dose because his current is now too little for his body weight. So we will go to 0.6ml 2xD (twice daily) for two weeks and then to his required 0.75 ml 2xD and recheck him in two months. So we will have cardio again in 2 months  and another echo :(  It's not completely horrible news since a lot of kids with HLHS are on BP meds and it's something we can control but it's not what I was expecting.

Other than that, heart function looks good, his Glenn looks excellent and the regurgitation (flow from lower chaimber to upper caimber is somewhere between mild and medium but the doctor thinks that this may go back to mild once we get BP and heart muscle under control.

So all in all we didn't get terrible news, just a little maintenance changes. Though Jasiu behaved better than expected mamma still needed a full glass of wine this evening to relieve some stress that built up all day today.
﻿﻿
﻿﻿﻿ ﻿﻿﻿
﻿﻿
Posted by Kathy K at 7:46 PM No comments: