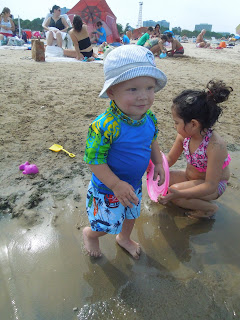 August 25th marked Jasiu's HALF BIRTHDAY. I can hardly believe that he is already half way done with being a one year old. I think the time is just flying much faster these days.  Also special is that this is my 100th post, which I think is kind of cool.  August 25th was also Emily's 4th birthday party so I have some cool pictures of that too.  I think 18 months is a pretty big milestone we are reaching here with Jasiu that I wanted to document all of his accomplishments.


So Jasiu at 18 months is doing the following - walking  running all over the place, saying mama, tata, daj (give) , tak (yes), auto (car), copka which sounds like kopka (hat) and sometimes dziadzia or babcia (grandma and grandpa) and Aga (which is my sister's name). He just recently started mumbling the ABC song and just LOVES it and to dance to it on when it plays on any of our toys. He can figure out how to climb onto pretty much anything, and brake just about EVERY thing he touches if you let him, is mostly happy except when teething. He has such a strong personality and expresses his anger in a very clear way (head banging on any hard surface or screaming until he gets his way). He loves the water and being at the beach, doesn't care for story time or books just yet. He will eat just about everything if distracted enough and is almost completely off of baby foods and eats all table foods even bigos, kwasnica and galabki (polish dishes that have a pretty sour and a distinct taste). He knows to point to himself when you ask him where is Jasiu, mama tata or Emily, etc. Knows his nose, ears and eyes though he sometimes confuses them. He recently started drinking from the big bottle at night and morning a whole 6 oz (just to remind you for the first 18 mo. he has never drank more than 4.5 oz ) and today he sat at the table in a booster seat (he's not a fan but I'm so sick of the high chair, I want my kitchen back). He weighs a whopping 24 and a half pounds, not sure on the height :(  but still fits into all of his 12 month onsies but for the fall I had to upgrade to 18 month pants because the spring 12 month ones are too short.   He is doing pretty well cardiac wise and only on one medicine for blood pressure twice daily and on a vitamin supplement once a day. I also supplement a homeopathic syrup that is supposed to boost the immune system and give it to him when I see a sniffle here and there or during the flu season.
﻿ ﻿
Life is so "normal" right now that I can't believe we are 6 months closer to the Fontan procedure. I also started preparing Jasiu for our next cardio appointment by dusting off the pulse ox and first letting it hang out on the changing table next to him (rest assured the first time he saw it on the table again he screamed bloody murder and I didn't even open up the case). Then the next day we opened it, then took out the probes, a week later when he was "OK" with it being there I turned it on and on the first beep he shed some tears but I wasn't hooking him up to it so he calmed down. Now we are at a point where he sees me putting it on my finger and toe while he's playing after bath time and he is warming up to it. He even touched it and played with the probe.. next step is to attach him to the darn thing without an outburst... After that I'm digging out the stethoscope and the process will be all over since that is another crying trigger for him. I am running out of ideas to get him to like the doctor's and the equipment he sees in the hospital but I hope this stuff works. The only other thing I can imagine doing is wearing scrubs... and we actually tried that experiment with my sister's pharmacy lab coat and Jasiu was not a fan...
Finally, Emily's birthday party was a hit. We had many guests and the hit of the party were the ponies by far! Emily at first did not want to share and wanted to ride all afternoon, so thankfully we booked two.  It was a nice time with family and friends and a nice way to close out the summer.


Also, meet Sparkey, our newest member of the family. 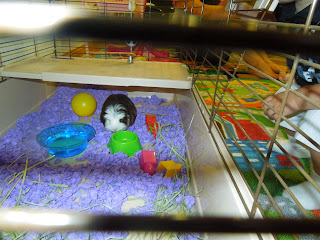 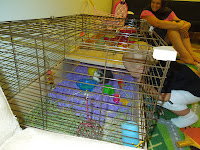 Our last days of summer were spent on a great day at the beach and my beach bums loved it.