In one month from now, we will be handing over Jasiu for his third open heart surgery. Yes, our date has been changed to April 22. Friday we had a consult with Dr. Illbawi, Jasiu's surgeon. He is such an amazing person to us and to so many families that he touches during the toughest times. He takes time few times a month to sit down with families and go over the procedure, draw pictures, answer questions and provide hope. Me being the "obsessive compulsive disorder" one I knew the procedure fairly well but I listened with Joe and then we asked our questions. To prepare for this meeting, last week, again being the OCD one, I got Jasiu's medical records from the hospital for his last catheterizing procedure and his last echo report to get an idea of what exactly we are up against in detail.  I learned a few things about the specifics of Jasiu's anatomy and maybe I think that I should have known before, but I know now. Another thing I learned is though I know a lot of medical jargon, I still don't know that much and had to look up quite a few things. Here are a few observations from reading these documents:

So in our meeting we found out what the procedure  will entail and all the options that may or may not happen depending on what they see once they open him up.  Our surgeon performs the extracardiac Fontan, meaning they insert a gortex tube and run it along the outside of the heart wall, instead of going through the heart muscles. Dr. Illbawi  switched to this variation of the procedure about 12 years ago and has seen improvement in the long term outlook for his patients. Jasiu may or may not also need a fenestration, which is a small opening in the new tube connecting to the heart to relieve pressures. They may also need to work on his valve, but all of this we will not know until they see how his body actually looks and reacts to the new circulation.  Dr. Illbawi provides so much calm and hope when he speaks that it really puts us a ease. Doesn't make it easier, but it really helps.   Below is a picture that Dr. Illbawi drew while he was explaining this to us.  Also this link shows a video of what is done (it's not graphic, just computer gnerated 3D visual explanation)  Link to Video of HLHS treatment (3 staged surgeries) 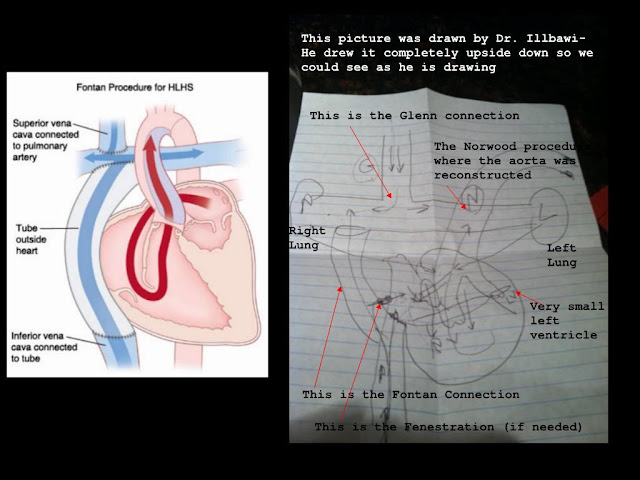 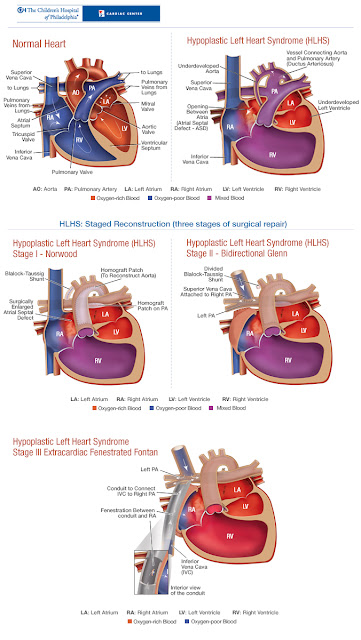 This picture can be viewed from Children's Hospital of Philadelphia website. With this link.

In other news, Jasiu and Emily both had some sort of virus and as usual a bad cold for our little man ends up in an ear infection. I took him in on Friday as well because his voice was still hoarse after 5 days and his cough was also not getting better so we went to get checked out and ear infection it was. Since this is our 3 rd infection this winter and even when not with a cold there was a little fluid in his ears at the well visit we got a referral to an ENT specialist (ears, nose, throat) . Hopefully we get an appointment this week because after Easter we are on a mini lock down and Jasiu is sentenced to 3 weeks of being home bound : no stores, parties, church and minimal visitors in hopes to keep germ exposure to a minimum. I hope it works otherwise we postpone once again . For the time being we pray for health and we humbly ask for your continued prayers as well.

I will keep updating once there is some news.
Posted by Kathy K at 8:33 PM 1 comment:

This is the second anniversary of Jasiu's first open heart surgery, the Norwood Procedure.  I don't think it will ever get easy thinking about that day. That day our fears our hopes and dreams for this baby boy of ours were halted and we just focused on that ONE day, to just get through it. We did. We got through  that day and again for his second surgery and we lived our normal life, not thinking much about it for over 18 months. I don't think I dwell on it as much anymore in a sad way, and I feel more overjoyed that he has gotten through it and that despite all of those obstacles he is just kicking HLHS's butt.  However as April 22nd approaches (Yes our Fontan date as changed) I'm starting to become emotional once again.  We will celebrate today as a victory day and continue celebrating each and every milestone on this journey because life is worth living and Jasiu reminds us of this every day.

We also had a 2 year well baby check up with the pediatrician. I love her and she genuinely takes his best interest to heart and is so darn proud of him. Jasiu in his true diva way only cried when he was being weighed and measured and the ears and throat check, other than that he was talking up a storm, let the doctor listen to his heart and lungs. I was shocked. He is 27.6 pounds and about 34 inches tall which puts him at 42% and 40% for weight and height respectively. Still didn't catch up to his birth 50th percentile but he is on the chart and growing steadily, she is very pleased. She complemented his speech and how vocal Jasiu is. With his Fontan coming up and his last Synagis shot being scheduled for next week she said she will try to convince the insurance company to cover one more dose of the Synagis just to protect him just in case. She said if she pushes hard enough, usually they approve it, I love that she's willing to stand up to them. The last part made my day, she went over his whole 2 year history and noted that besides the scheduled surgeries and two caths he had no hospital admissions, and he has rarely (relatively speaking based on his condition) been in for sick visits and said he and I have done such a good job at keeping him well. When she said that I am pretty sure I saw her get emotionally teared up, as if she was so proud of him. I would have never though I would get that reaction from our doctor, and I'm so glad we chose her and that she cares so much. She even remembered that I'm " that accountant" and asked if I intentionally scheduled his surgery post "tax season" .. Ha ha.. why.. yes I did, that and post flu season I mentioned and she just smiled.  It was one of our best visits.  It also didn't hurt that Jasiu was all caught up on his vaccines so he had no shots.  Hurray for no shots and Jasiu even left the doctor's office saying "Doctor tu" and pointed at his chest that she was listening to him and wasn't crying about it.  What a blessing.

So as we celebrate our miracle boy's first fight with HLHS I want to ask for prayers for one of his heart buddies, Austin, who will be fighting his THIRD battle on Monday. Austin will be having his Fontan and needs lots of prayers for a smooth ride and quick recovery and for his mama to have the the strength to get through this with him as well.  Go Austin Go !!!
Posted by Kathy K at 11:54 AM No comments: