This little piggy ...& a whole lot of updates

I can hardly believe it... Jasiu these days is a little piggy.. not quite the bottomless pit but mostly looking for something to eat. He has started to begin to feed himself and is quite good at it.. mostly. All he needs is his "charlie and the numbers" and he will open wide and eat and eat. One of our biggest prayers have been answered and our determination to keep experimenting with food and keep introducing patiently has paid off. We are so blessed.. See for yourself. 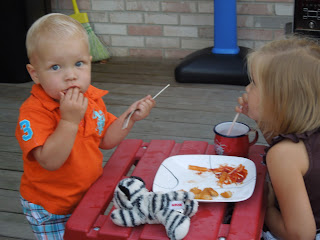 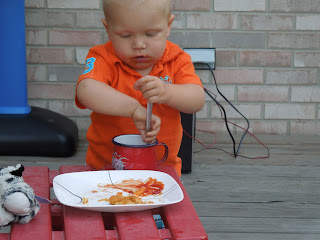 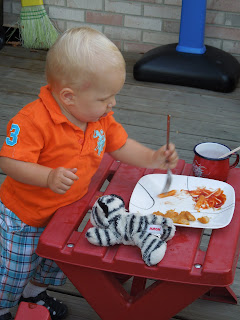 Next update... Jasiu is quite the handyman... he even helped dad and grandpa with the swing set the kids got for Emily's 4th birthday... 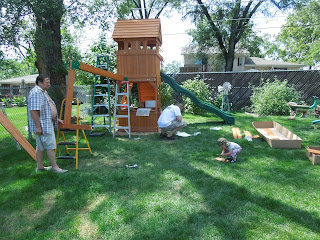 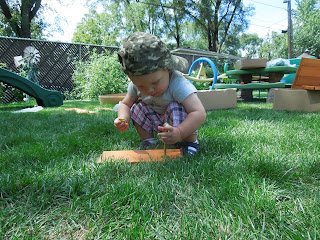 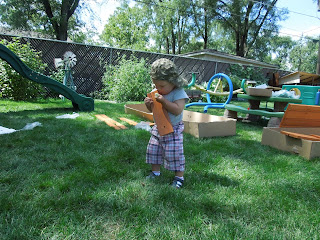 Next... Can you believe my little girl will be 4 next week.. that's FOUR, I feel like she was a baby Jasiu's age just a few minutes ago and she is sooo big and smart. She is in the 95th percentile for height and weight so that makes her look like she is 5!!! Take a look :) 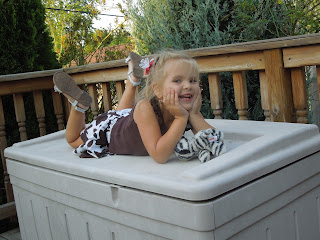 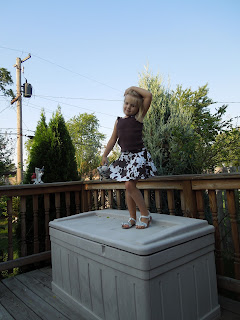 Finally, this Friday I had a  very special play date at our house... It was a Heart Buddies play date ! I had 5 HLHSers all that go to Hope for their surgeries and are Dr. Illbawi alumni.

These 5 kiddos and two of their siblings Emily and Morgan (Austin's big sister) played so nicely together, enjoyed some pizza and snacks and the mamas got to talk in a language that a year and a half seemed foreign to me. We just "got" each other and were able to share stories and for those of us pre Fontan (which is fast approaching for all three) this was a great experience to talk and get a lot of our questions answered that even the doctors can't answer. In a heart community that recently faced so many heartaches, it was so refreshing to see these kids be so normal. It really gives a lot of hope.


Today we went to a Polish Mass  in Indiana in our traditional Polish outfits and I think my little highlanders look so cute in their outfits (I may be a little bias here.. but hej.. it's my  blog).  Jasiu is quite the ladies man... 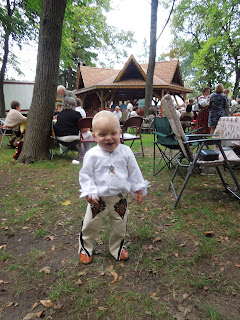 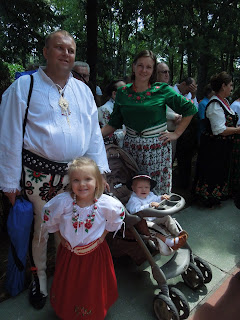 Not a fun Cardiology update...

﻿ ﻿
Today we had our cardiology appointment to see if the increase in Enalapril was working to help control John's blood pressure and help his heart muscle not work so had and reduce in size since it was discovered that  his heart has "thickened" at the last appointment in May. As you may recall we were supposed to see Dr. H after 2 months (and I made my appointment exactly for 2 months later) but it got pushed back because the doctor was out of town unexpectedly, than John came down with the HFMD and then the Dr. was out of town so the appointment was scheduled for today.  Now let me preface that I have been proud of myself that for the last 17 months I have known my child so well that and we have been so lucky that I have scheduled each of his cardiology appointments at a time that I know by the time the echo comes around, John takes his bottle and passes out and the echo is done in a nice dark quiet room while he naps in my arms. EVERY TIME for the last 17 months worth of appointments EXCEPT for today.  This unfortunate event is partly my fault and partly the staff at our clinic (and gosh I love those people,   but today they were a little slow to meet our needs).

The timing was good, it was before nap time that all the screaming in the waiting room, during vitals and all other routine stuff tired him out. By screaming, I mean from the moment we walked through the hospital door until we left with brief moments of non crying when no one from the hospital staff made eye contact or was within 5 feet of him. At the very sight of the receptionist he went hysterical. My poor kid has the biggest white coat syndrome I have ever seen or heard of.  Anyways... once they finally left him alone after vitals, I gave him his bottle and he began to pass out. From all the commotion, I forgot to remove his shirt for the echo but didn't even realize it until much later. Once asleep we got the pulse ox reading and blood pressure reading.  So I finally tell the nurse to get the echo tech in there to start the echo while John is still sleeping or else we have a lost cause, we already stirred him while we were doing the blood pressure but he continued to doze off. Well the doctor hasn't written the script for the echo before hand so the tech couldn't start, that took a while and finally by the time he came in to do the echo, I realized I did NOT take off John's shirt and he did not have a button down. I have NEVER forgotten to remove his shirt before he fell asleep and of course when I tried to remove it ever so carefully, he woke up. To say that John is a light sleeper is a huge understatement, once he woke up that was it.  The tech gave me 15 minutes to try to get him back to sleep, poked in and that arouse John and then gave us another 5 minutes which turned out to be another 15 minutes of waiting and nothing, still not sleeping and we gave up. We just got one measurement while I was holding down a screaming Jasiu holding both arms and legs thrashing and heart rate nearing the 180's (he head the leads on that told us the accurate reading) (also normal resting heart rate for John is 100-115 beats per minute) NOT fun at all... Ohh and from all the screaming during the middle of the echo he coughed and threw up all over himself, the room and me of course, (the only unscathed party was the tech) so for the remaining hour of the appointment while they finished the echo and the doc read it and we talked ... I smelled like puke... again  NOT FUN !!!

SO the million dollar question was if the doctor could tell anything from the echo and pictures that we were able to get... yes... sort of... The heart muscle is still a little thick, thicker than they want it so we are increasing the Enalapril one more time to now 1ml 2x daily in hopes of helping it as well as the blood pressure that was on the high side (and it was taken during sleep, so it wasn't artificially high because of his strenuous crying or anything like that).  Next appointment in 4 months and I told the doc to already write the script for that and I will remember to remove his shirt and hopefully we don't have a repeat of today, EVER ! Also, the doctor said that we will begin talks and preparation for the Fontan at our next appointment, which will be based on that echo and most likely will require a pre Fontan catheterizing, which I can't imagine will be any fun for us or for Jasiu. My only hope is that in 4 months he will be a little older and by the time of the cath a little wiser and maybe not so against the hospital, but that's probably the hopeful me talking, the reality is that who knows when he'll grow out of it, if ever.

That's it for now, we will continue to pray that the medicine is working  that Jasiu will stay out of trouble and that we can and will try to enjoy our summer as best as we can.
Posted by Kathy K at 7:39 AM 2 comments: